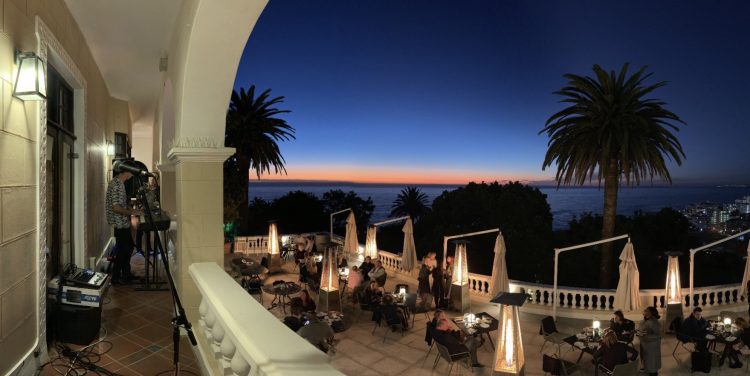 I recently covered the Arno Carstens’ wine gallery gig at Ellerman House for the launch of the hotel’s second year of Ellerman Sessions ~ for the Relais & Châteaux Africa blog published here.

I wish you had seen the way he shook his legs about. I wish I had captured it to show you but I couldn’t look away. No one could. No one did. You’d have seen them, those legs, if you were there with us, up close to the stage, with the wine gallery at Ellerman House behind and below us, a few intimate rows of chairs between us. Arno Carstens and his band: front and centre.

You’d have seen that crazed Elvis leg shaking that powered the night in short bursts with unexpected energy – between the trumpet, guitar, drums, and that iconic voice once belonging to the South African cult rock band, The Springbok Nude Girls.

Arno Carstens has been called “the godfather of South African rock,” by Mail & Guardian and “one of the most prolific songwriters and performers of our time,” by the Sunday Times. But no one mentioned the dancing.

At the first Ellerman Sessions at Ellerman House in Cape Town for 2019, Arno led us into another world the second he stepped up to the mic.

For a few hours, we were held by a power greater than ourselves, the rhythm and beat of songs that many of us South Africans in the audience have shaken and rattled to many times before – at festivals on the lawn, under the stars of our youths. For a beautiful moment, we were back at rock concerts past, or with friends and family listening to the radio on long road trips.

These illusions are just the sweetest dream

The night began at sunset with Moët on the terrace… with Cape Town’s best sundowner view, Bulgari perfumes, smoking macaroons and Hennesey cocktails, and the tastes of Ellerman House’s Executive Chef, Grant Daniels, assisted by 20 Degres Sud Head Chef, Sanjeev Purahoo, all the way from Mauritius.

And it ended with espresso martinis, baked brie with fig compote and raw honey, an olive garden of chocolate, coffee and tonka bean, and sweet rock ‘n roll still ringing in our ears.

It was the kind of night that manages, in a quick flip of the leg and strum of the guitar strings, to return the thrill and poetry to life, to stir the rattling playful somebody dancing inside of you.

Can you feel it?
It is heaven on earth
And there’s a light around you
You are burning in the rain

Take a look below at a few images from the night and find out more about the line-up for the next Ellerman Sessions here ~ as the celebration of South African music continues with Prime Circle, Majozi and Zolani.

Platinum selling singer-songwriter and front man for cult rock band Springbok Nude Girls, Arno Carstens has released multiple albums, with a string of successful singles and awards including “Best Rock Album”, “Best Alternative Album” and “Song of the Year”. He has toured with INXS, U2 and the Rolling Stones and performed internationally at Glastonbury, Hard Rock Calling and VFestival.