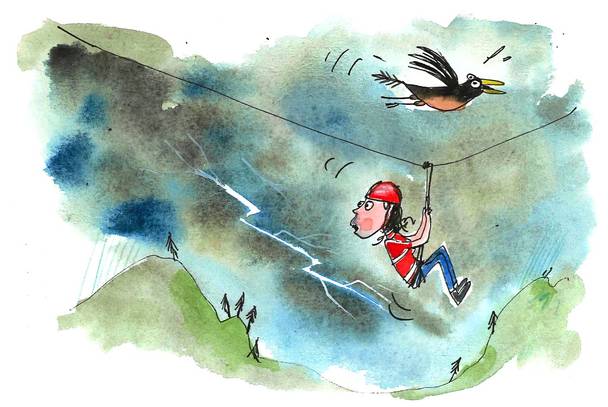 Accidental Tourist Tamlin Wightman tried to mark her 30th birthday with a daring excursion – and got way more than she bargained for.

What I did on my 30th birthday and what I should have done are very different things.

Much like when I told people, “I’m totally buzzed to be turning the big 3-0. How great to grow old and wise,” – when what I really meant, deep inside my aging heart, right down to my fast-fossilising sinew, was, “!@£$%^&”.

Time is an illusion. Resist the hour. Yes, yes, I too uttered such proclamations.

But I was still 20-bound then, on top of the hill with nowhere to go but down. And so, for the big day, in sympathy for myself, I decided to throw myself off the hill (attached to a cable while ziplining, yes, but do not dismiss the danger of a little steel in a lightning storm).

The Cape, allegedly amid a dry spell, turned dark and damp, very damp, within minutes, as we started up the Huguenot Mountains in Elgin in an open-sided truck.

The rain spat out from clouds shrouding the view of an empty Theewaterskloof Dam and filled our shoes and gloves with ice water. As we sledged to the first canopy – the point of no return – an air raid of lightning surrounded us and I uttered those famous last words.

“What happens if the lightning strikes the cable while we’re on it?”

Hoping for a response that would entail backtracking and coffee around a fireplace at the base camp, I was met instead with the guide’s flippant own last words, “Ja, well, he, ha, urg, you don’t want that to happen; it’s gonna feel like being struck by 50,000 kilowatts (or was it killer watts? All I really heard was, “Bite your tongue, Murphy, bite your tongue.”)

As said guide connected himself to the cable to show our team of terrified zipliners what to do, those 50,000 kilowatts struck the line and danced along to where he was holding on.

Our little lightning conductor shot into the air. Hail beat down on our backs as we hugged the rock and expelled expletives. The guide swung back onto the thin, wooden canopy built into the side of the mountain and, with a f***, f***, f***, he disconnected himself and trembled to a clearing not on the edge of a cliff.

Somehow, he radioed for help. We swam uphill to the drop-off spot and waited for the truck, which then glided us down the meandering mountain pass on what felt more like a white-water-rafting trip.

There were tears, there were doctors, but there were no Harry Potter scars and our guide managed to escape any serious circumstances, although not the nickname Flash.

And I decided, or rather nature had decided, there would be no birthday. On second thought, the earth was saying, go back to bed. Thirty is not for you. Stay young and dumb.

Of course, it could have been saying, “Tough luck, cookie, you’re 30 and it’s all downhill from here.”