As published on my personal project over at Mountains Creatures.

It went by the name Waterfall One. But it was clear to us that this was not the kind of waterfall you could belittle with a number. This was an individual. This was something otherworldly, a space out of The Lost World, which would make me Julianne Moore, the video documentarian and paleontologist, descending into the jungles of a deserted world, to play with dinosaurs… Dream job, right there.

And it would make the man I call both Dad and Mr Standing on One Leg, the mathematician and chaos theorist. As in, Jeff Goldblum, which would make Dad very happy I believe, on account of a crush on the film, The Fly.

We had done a fair amount of adventuring to get here, to this cavernous corner of the Jonkershoek Nature Reserve, where water gushed down from the cliff face above, into a cool pool below. It’s not that the trail leading to the waterfall was arduous, just that we had gotten lost. We had attempted to drive our low-hanging sedan over the terrain reserved for 4x4s, over great dongas in a dirt road careening around a mountain side. 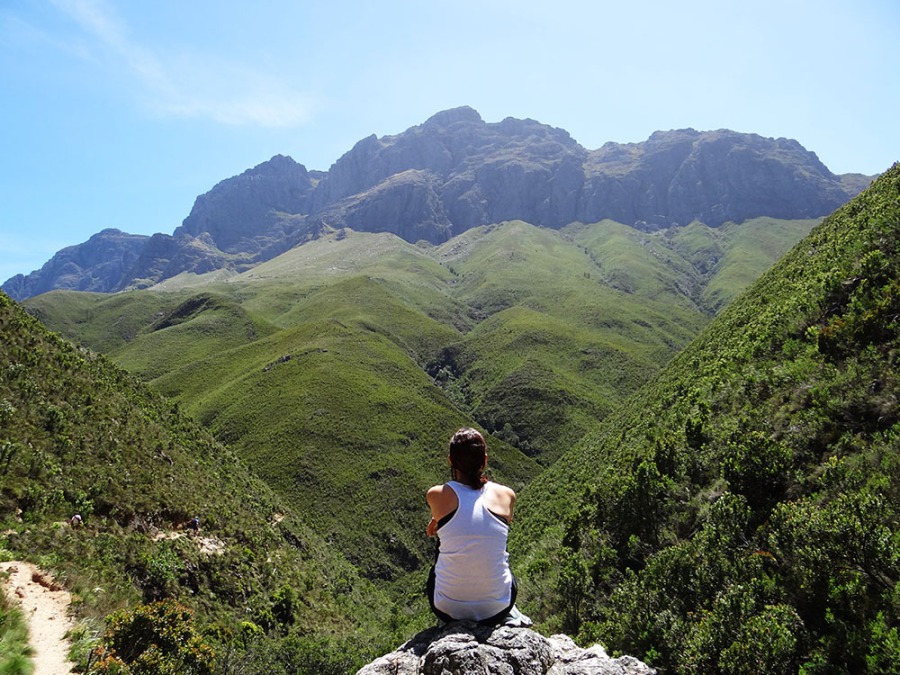 The wind did not help. If we even attempted to flee our vehicle, the gale blasting through the valley would slam the door on our fingers. And my fingers were having a beating as it was. The cold had set in – in all but one finger. We did not know why the one escaped unscathed, but what I did know was that the only way to save my extremities was to stick them down my pants. Which I did, once we had located the “parking lot” and begun our traipse through new territory. 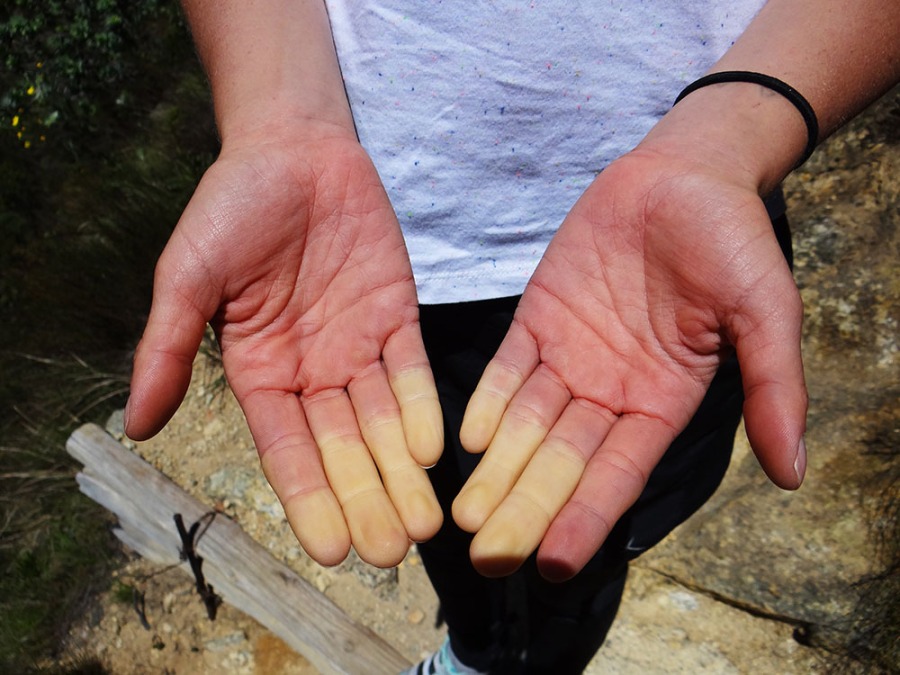 I believe that the warmth of my rear is the only thing that saved these poor soldiers and I cannot thank my well-honed reflex enough. According to my mother, it developed in my early childhood, when I frequently slept with my hands down my pants for warmth and for comfort as a young babe.

Playing in waterfalls doesn’t help the onset of frostbite, nor does it really distract you from the pain, but it definitely made for one of the most beautiful spots that Mr Standing on One Leg and I have taken our flask of hot water and our pop-up cafe of milk, sweetener, spoons, mugs, and Jacobs.

If the first waterfall surprised us with its sweet hidden glory, the second waterfall, similarly poorly named, Waterfall Two, completely eluded us.

We sat opening up our flask tens of metres from the actual spot, thinking, Oh, what a let down. But, as affords the tortoise in his race against the hare, we spotted a hiking group pass us and venture off into the depths of what we thought was a deadend. We followed. We scaled rocks and criss-crossed the flowing stream for some distance before we turned a corner and saw it. Finally. Yes. This was the treasure of our Lost World. This was worth the woes. This was worth freeing my hands from my pants to lift the camera to. 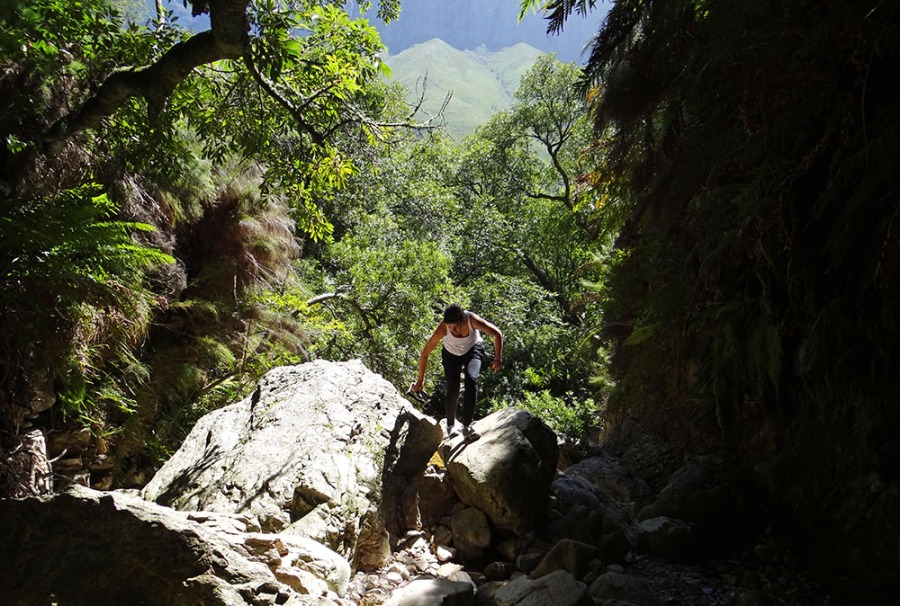 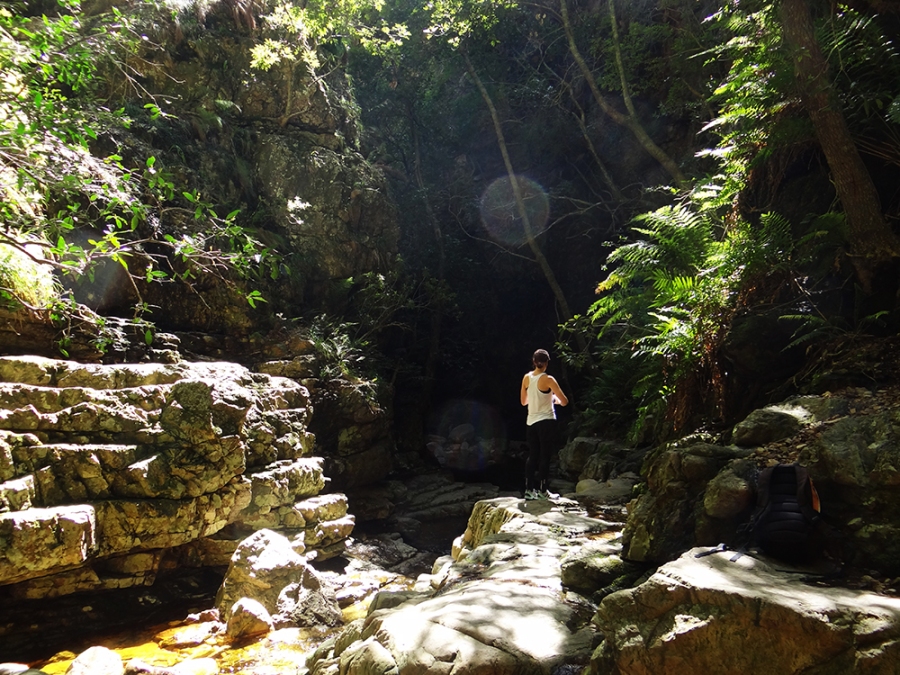 In spite of our peculiar beginning, the rest of the hike felt like home. It was that feeling you get when you’ve traversed the same path many times. The freedom it gives you once your feet are used to the particular shape of the rocks, used to the way they hug the soles of your shoes. You can run with abandon, letting the earth catch you with each leap.

We raced along the path back to the car, leaving the other trails for another day, a day less windy, less cold and with a chance of snow. The beauty of a mountain reserve as great and rugged as that of Jonkershoek is that you can do just that. Return again and again and seek out new trails, glimpse new sights, until every dirt path and rock face feels like home.

Even when in a sedan. 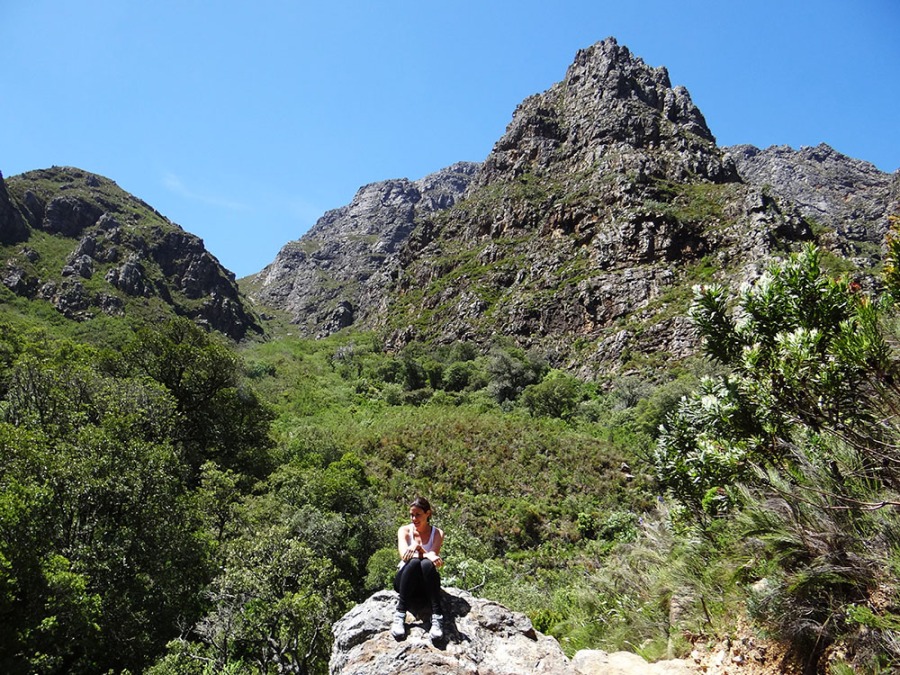