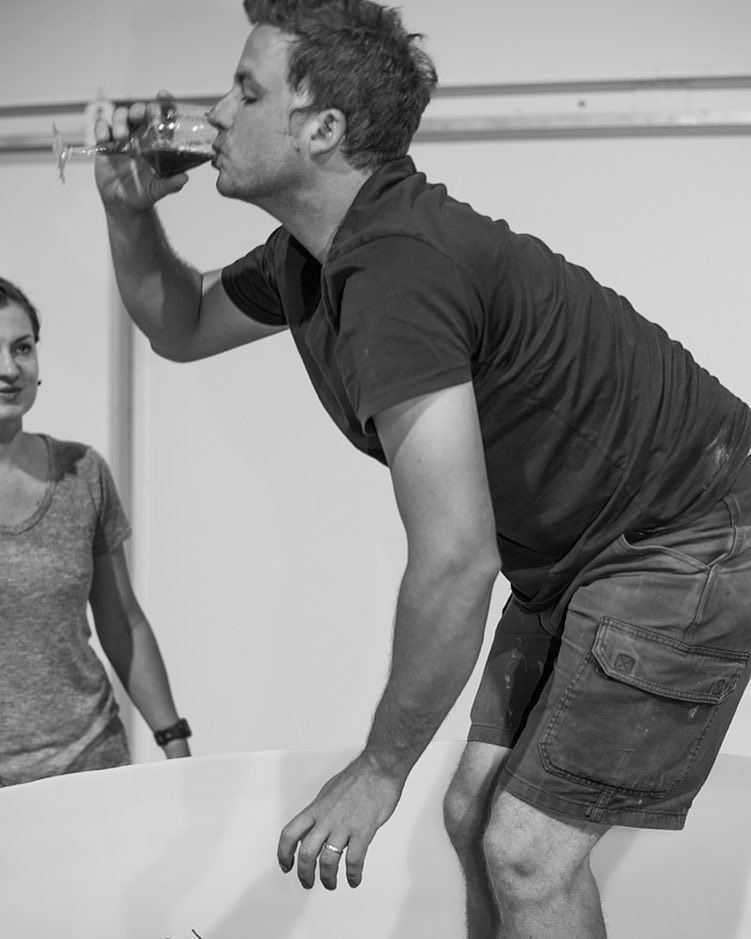 An Interview with Craig Hawkins

As published in ICC magazine

Craig Hawkins is the biggest advocate of natural wine in South Africa. Together with wife, Carla, he left the Swartland winery, Lammershoek, to follow his dreams and pursue his TESTALONGA brand of wines at their new farm, Bandits Kloof. Meet the man behind some of South Africa’s most exciting wines.

He doesn’t mention Bob Marley. But there the dreadlocked reggae singer sits, smiling in his frame on the cabinet. This is Craig Hawkins’ office, but really, Craig says, it’s just where his music is, here and reverberating through the speakers of the wine cellar.

He doesn’t mention Marley, as we catch up over the telephone connecting us between his and his significant other, Carla’s farm, Bandits Kloof, in the countryside of the Swartland, Paardeberg wine region, in South Africa, and me, in Cape Town.

But who Craig does have time to mention is Eminem.

“I don’t only necessarily get inspiration from the wine world,” the winemaker says. “For instance, I listen to a lot of music. Somebody like Eminem is such a role model to me. He was this white guy entering the rap world. It was unheard of. And he had such raw passion. He was also highly intelligent and had incredible business sense. He grabbed the world. He just did what he did. I respect that. And Mozart… who was the Eminem of his period. A complete outsider. Those are the guys that inspire me, the first properly original pop artists.”

Music is so much a part of Craig’s creative process as a winemaker that he admits, “Our sound system in the wine cellar is from an ex DJ. It’s louder than some clubs. I enjoy music. I enjoy the story it tells, and the emotion it has. Wine can give you that same feeling, which is what I try do with my labels. I try to tell a story.”

Doing what he wants is important to Craig and it is something evident not only in his wines and their labels, but in the life philosophy that he is, slowly, composing for me.

“Winemaking is the tool that allowed me to do what I love. It encompasses everything –outdoor life, and indoor with the creation side of it, creativity, meeting people. It has enabled me to buy a farm, to spend time in the fresh air and it has taught me that life is not about just chasing your tail. Winemaking for me is a way to live the life we enjoy.”

It is his brother who introduced Craig to the world of winemaking. “Initially, from my limited knowledge, I found it quite boring, quite generic.”

“I got into wine as a result of my older brother, Neil (who now makes wine in Australia at The Wine Farm) while still at school, just as a way to earn extra money, working in his vineyards when he was based in South Africa. He showed me his cellars and the transformations that took place. From there on, I had the bug.”

Craig asked Neil who he considered the most “out-there” winemaker in South Africa at the time. “And he told me about Eben Sadie. I called Eben and asked for a harvest job, which he gave me and I worked for him for five years, which is how I came to the Swartland. Eben opened my eyes. He had a whole new approach to winemaking. I wanted to learn more, to keep growing, after that. I spent six years in Europe following that, working six months overseas and six months with Eben.

“The greatest influence on me was Tom Lubbe. I spent a lot of time working with him at Domaine Matassa in the south of France, acquiring the knowledge and experience that helped me later on. He really pushed me over the edge, to the point of no return, in terms of what I want to do in wine.

“We don’t have the wine culture here in South Africa that they have in Europe. I wanted to work with guys who grew up in wine, not just who studied it. I kept searching for purity in wine while in Europe. That’s how I discovered natural wine.”

While working in France in 2007, Rémy Pedreno from Roc d’Anglade introduced Craig to a skin macerated white wine, a white wine fermented on its skin, made by Antonio Perrino, a winemaker in Italy and a man whose nickname, Testalonga, meaning “long face”, Craig would use to name his own brand of wines.*

(* “Testalonga is also the name of a famous bandit and politician from Sicily. I like that connection,” Craig says, “because our wine is a little bit different. And I like to think that we have a bit of a sense of humour.”)

“It had an orange colour and to me it was a new set of smells, flavours and tannins. That changed me, tasting natural wine for the first time. Antonio’s was the first skin contact wine I tasted. It was the most different thing I’d ever tasted, and it all came down to the way he farmed and what he did in the cellar. It blew my mind. I thought I’d go back to South Africa and find someone doing this, but no one was.”

Craig returned home to South Africa in 2008 and while working for Eben, he made his first wine – a skin contact Chenin called El Bandito, under his brand, TESTALONGA. “It was a white wine made like a red wine. People asked me how I’d sell it because it was so different, so unique in South Africa, but it snowballed and sold itself.”

“I was dating Carla back then, we both studied wine and were in the business together. I was working for Eben and she for the wine estate, Lammershoek, which my now father-in-law part-owned. I like things small and focused but he asked me to come and work for him and even though it was a bigger land, I did – for five years. I changed the whole farm into organic. For me, organic farming is non-negotiable.”

At the end of 2014, it was time to go their own way. “Carla and I left the company and bought a property in the north of the Swartland, where we now live, farm and make wine.”

The new farm lies off on the national road, the N7, which travels northwards from Cape Town, parallel to the Cape’s West Coast. The farm, still in its infancy, is open to guests by appointment.

“Carla and I discussed it and to do what we really wanted to we had to start from scratch. We looked for land and found this farm in the far north of the Swartland. It needed a lot of work. It still does. It’s 180 kilometres from Cape Town and had no electricity at first, no vineyards, but amazing soil and water. We lived with just generators for six months. I had to get the cellar right, put in the electrics… Now we’re preparing the soil and vines for next year. And in the meantime, we use grapes from the farms we rent.”

Craig rents about 10 hectares of farmland in the area – vines growing from the granite soils of the Swartland, Paardeberg. Together with Carla, he currently produces 13 going on 15 wines, under the names El Bandito and Baby Bandito. In terms of winemaking, that’s a lot. “I’m not doing for the sake of making more wine,” Craig says, “but every label and wine is a separate vineyard.”

In line with his natural winemaking philosophy, all of the vines they work with are dry farmed – as in that they aren’t irrigated but rather survive on rainwater. “They were planted in the 60s and 70s and have adapted to the climate so they don’t need extra water. You get 100 times more intensity this way. It’s my goal to farm like this, but it will take seven or eight years to get the new vines to adapt.

“Natural wine is largely about the farming process. There are no pesticides in the soil, or going into the vines. You’re not killing anything. You’re still farming but you’re farming in the pure sense of the word.”

Bringing it back to his other love, Craig says, “It’s a bit like with music, everyone has an opinion. It’s a matter of taste, how it makes you feel. You can’t put your finger on just what is different. Like you can’t with Jimi Hendrix or The Beatles. With natural wine there was a purity that attracted me, that I had been searching for. It’s more wholesome. I can taste the difference between natural and more heavily manipulated wines. Over-manipulated wines make me foggy. When I drink it, I don’t feel happy. It’s like eating Mc Donald’s food.”

Craig shares his love for natural winemaking with other farmers in the Swartland as well as a few South African winemakers who are catching on to this phenomenon.

“We have good relationships with the farmers around here,” he says. “People come to me for advice on my style of wine-farming and skin contact wines. It’s brilliant to be able to share ideas. We’re fairly likeminded winemakers. It’s this closeness between the people here that I love about this area. You don’t see something like this in the wine world that often. We’re not competing. It’s just 20 wine producers wanting to sit and have beers together.”

Natural farming may be new for South Africa, but this way of farming certainly isn’t in “the old world,” as Craig calls it. “I was fortunate enough to be invited to natural wine fairs in France early on and we were always the only South Africans there.” But as a result of the sharing of knowledge in the Swartland and the Butterfly Effect of Craig’s natural winemaking, he says, “there are more and more South African wines at international fairs these days, which is the best thing I could ask for. They’re friends of mine. That’s what I like about the natural wine thing. We have a party, we share wines and ideas. It’s a community.”

Perhaps the most interesting thing about this and the most revealing about the power of winemaking is that Craig isn’t even a people-person. Not naturally. “What I love most about winemaking is the people we’ve met,” he now says. “I was a very shy, introverted child and winemaking has allowed me to come out of my shell. With winemaking you engage with so many people and you’re exposed to so many different cultures. I’ve learnt a lot about other humans through this business and about what is truly important the more life goes on.”

And what’s important is being able to own a piece of earth where you can live freely, doing what you love, with those you love, while Eminem and Mozart alternate over a speaker somewhere close-by.